I wondered where else relationship-building showed up in King’s experiences.

“I like relating to people I don’t know,” he said, propping one of his paintings against the roof’s walls. “That’s where I get to go, where I’ve never been before.”

Not surprising, this speaking to strangers, considering  King does much of his painting in front of others, right on the street. It doesn’t take long for people to gather around and get to know him.

“I go to specific locations on a continuing basis. People come up and tell me,

“People think of artists as detached but I can have a regular conversation with anybody. Just being yourself says a lot more about you than your art.”

In the past two years, King estimates that he’s done over six hundred paintings, two hundred of which he has given away or simply left on the street.

“I don’t believe in keeping everything for myself,” he said.  “It’s a privilege and a blessing just to do art, let alone do it and be able to sell it. Most artists do not sell their work—some because they don’t want to and others because they can’t. Some sell—but maybe not in their lifetime. That’s a fact artists deal with.  In art, you find many people ahead of their time.”

Live painting, painting in the here and now right in front of the public’s eyes, is one of the highest risks an artist can take because they are challenged to focus with blasts of traffic, music, and language going on around them. It takes a high degree of confidence and attention, to paint in front of others.  It also results in King hearing from those who stand around him, many of them lamenting the artistic dreams they’ve abandoned.

“People tell me, ‘I used to paint,’….or ‘I stopped painting because…’ It’s sad but I totally get it. It takes a lot of confidence to live as an artist. I stay inspired by people, who come up and tell me they love what I do, and that if they could, they would paint full time too.”

Like Basquiat, King does urban street art, a colorful, often geometric, expression of faces and objects, and sometimes words that can be looked at frame by frame, like puzzle pieces, but yet make an eye-pleasing whole work. Besides paintings, he also does sculptured jewelry and hand painted street clothing, such as jeans jackets.

“Sometimes people stop because they’re artists themselves…they ask me, “Why street painting?  I paint on the street so that people can see my work. I work quickly, doing these pieces in a day or two. Others connect with me because I remind them of Basquiat.

“I’ve learned that positive energy keeps you in a state of confidence.  Focus comes from self-confidence, it comes from self-belief. We’re told to believe (in something outside, apart from us). We’re not taught to believe in ourselves. We fall victim to hearsay, listening to others say… ‘I don’t think you should do this… or that...’ Opportunity comes from having positive feelings; from understanding one’s self… Things that you do, that you love, will vibrate with emotion.”

Serious about a purchase: @whereisronking

“I built a relationship with the manager of this facility,” said visual artist and painter Ron King, as we entered a swanky downtown LA loft building, “and with a lot of the tenants— who then gave me good references.” A few seconds later, and twenty-four stories higher, we entered the rooftop-fitness area, and witnessed the city as though it were part of a film.  “Now if I need to, I can use the facility for business reasons.”

Which is why I’m here, to interview this young and handsome hot LA street artist, a twenty-first century student of the legendary artist Jean-Michel Basquiat. 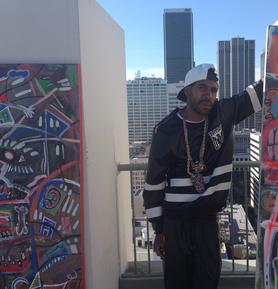