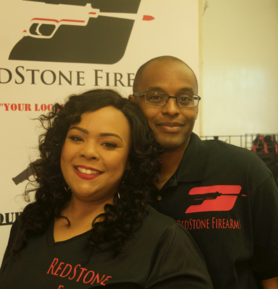 “We agree that’s a little unusual,” Geneva said, telling their story, “but that’s the way it happened.”

After their marriage, the second for both, they formed Redstone Firearms.

Jonathan works their store in Burbank, overseeing its expansion and the opening of their second store in Ontario. Geneva works full time in corporate, doing Insurance Account Management and Sales. They have three children.

They began the business by obtaining a Federal Firearms license, so they could sell and take delivery of firearms into their home. Most of the first customers were friends and family. the business grew and when the name of the business was listed on the National African American Gun Associations (NAAGA) website, even more clients arrived.

At that point, feeling that having so many strangers come into their home might eventually pose a security problem, they decided to open a brick and mortar store.

Their customers include active duty and retired military and police.

“Some want to keep up on the latest, high tech, improved weaponry,” said Jonathan. “Others shoot for sport. For professional marksmen and women, shooting can be a great stress releaser.

The required focus and concentration, the positioning of the body and the firearm, the sound of the explosion; provides some professionals with a release, especially military and police personnel.”

But not all their customers are pros.“We also have a number of beginners,” said Geneva.“Our business cards state: ‘Consult, Educate, and Train,’ and that is what we do. We fit the firearm to the person and then teach them how to to use, clean, and maintain it.

“For example, in consulting we talk with people and in some cases even visit their homes. Why do they want a firearm? Is it for personal safety, safety of their entire family, or to secure their property? Those things determine the type and price of which guns they will need to review before making a purchase.”

They also own an outdoor firing range. They feel it provides more realistic education and training.  “While an indoor range has its usefulness, the outdoors can better simulate real life situations where shooting may be involved,” Jonathan noted.

Each holds a position on the Executive Leadership Team for NAAGA. Geneva is Director of National Internal Communications and  Jonathan is  State Director of Chapters for California.

​​When the Solomons went on their first date the subject of firearms came up.

Jonathan’s experience was positive. He fired his first firearm at age five and was in a competitive shooting show at age six. Geneva’s was the opposite, her father lost a leg as the result of a shooting, and though she did not fear guns, her family did not talk about them because of her father’s experience.

In a way the couple personified the positive and negative outcomes of gun ownership; one for sport, the other for inflicting injury.  Out of this discussion they bonded.