​“There is a film made by students attending the Boys and Girls Club of San Pedro. Another made by four girls in foster care with the help of Kids in the Spotlight. And still another film, Foster Boy, was produced by basketball star and entrepreneur Shaquille O’Neal. That movie is the true story about a boy who experiences abuse while in the foster care system.

“These films educate the public about what to look for and how to make their own children aware of how they might be recruited into trafficking—often by a peer in their age group.”

Erlandson says forces behind the spread of trafficking include pornography, social media, films, videos, music and video games that portray people as objects to be sold.

Our society, through passivity, allows media to normalize images and messages that feed human trafficking.

Erlandson first got involved when he did volunteer work for the United Nations office in Los Angeles. At the time war refugees escaping from Sudan were on their way to Israel. Crossing through the Sahara desert they were befriended by Bedouins who drugged them, cut out their organs and buried them in the desert.

“This type of betrayal got to me. I had to do something,” he says.

“Whether its organ trafficking or sex trafficking, it has that same element of betrayal. Children and young people looking for friendship are betrayed by adults, who in instead of helping them, turn them into a commodity for sale.

“After every film or block of short films there will be a discussion and Q & A session. We take a look inside the lives of people robbed of their values as they are turned into prostitutes. We answer questions like ‘Why don’t they just leave?’

“The films put a face on a situation which is right in front of us; it’s called the crime that happens in plain sight, if you know what to look for.

“We hope people will leave inspired to volunteer with an organization or to donate. They can write about it or speak about it; work with a local politician or law enforcement. Anything a person does will go a long way to change lives and end the horror.”

“The area of human trafficking I work in is prevention. By examining the family culture, especially the role of fathers, we can identify markers in boys and girls that make them potential victims to be targeted by pimps and their recruiters.

“Homes where young people experience neglect or abuse cause them to seek attention—often from the wrong people; people who sooner or later will betray their trust and turn them into commodities for sale.” Erlandson believes the upcoming See It End It Film and Arts Festival will educate viewers, of all ages, to recognize the roads that lead to victimization, and inspire them to become active in ending this crime against vulnerable children and adults. The Festival will be held on Friday, April 3, 2020 from 6 pm to 10 pm and Saturday, April 4, 2020 from 10 am to 10 pm at the Warner Grand Theater & Grand Annex at 478 W. 6th Street in San Pedro, CA 90731. Many of the filmmakers are young people. 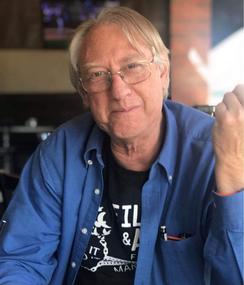